In this issue we feature the topical issue of dispute resolution under investment treaties with articles discussing how the twelve parties to the Trans Pacific Partnership Agreement will settle disputes, State immunity and enforcement of foreign arbitral awards under English law, and the scope of dispute resolution clauses under post Soviet-era BITs – the Yukos case.

Just as topical as a result of recent intense media reporting of the botched 60 Minutes child abduction in Lebanon, we look at resolving international parental child abduction cases by mediation rather than resorting to so-called child recovery agencies in situations where the straightforward remedy of the Hague Convention does not apply.

We also look at protection of admissions in settlement discussions; the award in Hong Kong of indemnity costs against a party initiating arbitration in breach of arbitration agreement; how freezing orders can preserve enforcement of arbitral awards; the Havana Club trademark dispute between USA and Cuba; and more. 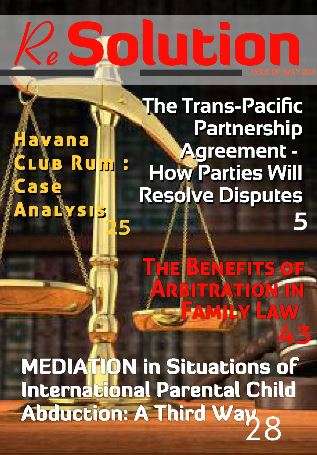